A picnic day at the María Luisa Park 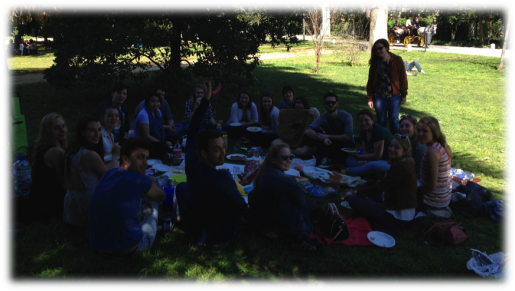 Some people say there’s nothing like Sevilla in the Spring. It’s the city’s most cherished season, when the scent of the orange blossom fills the streets and the warmth hasn’t yet reached stifling temperatures. 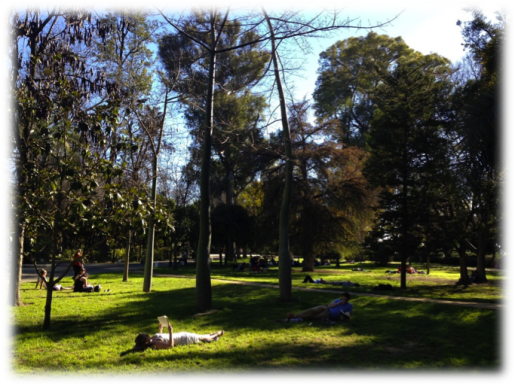 So, it is just the right time for sharing a good meal with our UNE friends, international students and some Spaniards. The picnic we had last Saturday was the first activity the mentors organized ourselves. Each group contributed with something, though I must say I totally surrendered to the charms of Cameron’s salad and Cristina’s group chocolate cake. Hats off to Maria’s pie as well! Tortillas, the beloved croquetas, chips, some cold gazpacho, chorizo and cheese, cold meats… There was plenty to choose from, and some of us ended pretty full, but it was totally worth it!

Among so many mouth-watering stuff we had the chance to talk and catch up on each other’s lives. We also had some guests –French, German and Spanish students- with whom we had some laughs. It’s always good to meet new people! 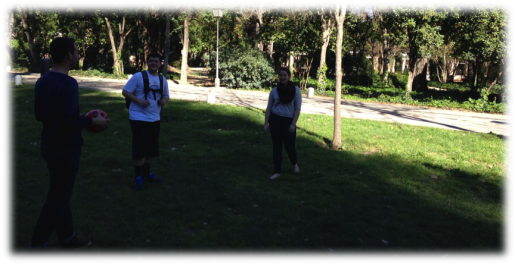 Not everything was about the food, though. Some of the UNE students got to learn a typical schoolyard game: 1x2. Soccer was also present –of course it would, we are in Spain!

All in all, I would say the atmosphere was perfect –sun for the warmth-craving foreigners and a gente breeze for us, the food was absolutely tasty and the setting was beautiful –the charming Parque de María Luisa, with its coaches passing by and the sound of the hooves on the background. It was a pity that most of our UNE friends had to leave earlier because of their midterms, but anyhow we spent a pleasant Saturday together, and I truly hope we get the chance to repeat the experience sometime!