A chronicle of a Granada Trip

Waking for an early morning of long bus rides, us UNE students had no idea what was in store for our little adventure to Granada. After a two hour trip southeast of our home in Seville, I found myself in a beautiful city, nestled in the Sierra Nevada mountains. Quite a change from Seville, we stepped off the bus into a cloudy and damp atmosphere, a nice cool breeze rolling through the streets. The walk to our hotel was a brief, yet beautiful view; the buildings and streets of Granada were so different from those of Seville, a perfect mixture of modernity and antiquity. A quick stop at our hotel and we were off on one of those Rubenesque adventures (featuring long walks through beautiful scenery, uphill, through rain).

Honestly, from the moment I stepped onto the street, I fell in love with this city. We walked through these old gothic-style gates, stepped over puddles and weaved through the umbrella salesmen to head to the main part of the city. Looking upwards, relief statues littered the buildings, marble and stone eyes following us as we traversed the streets. 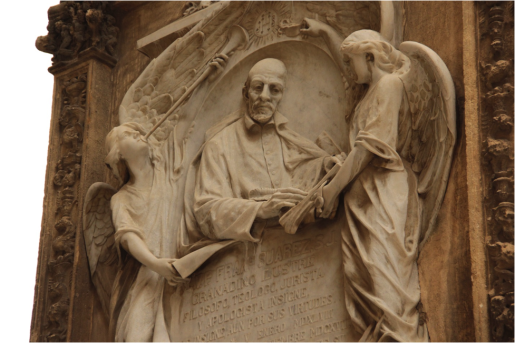 At one point during our walk we passed what we assumed was a statue, but instead was a beautiful street performing angel. Although living, this angel blended in with her surroundings so naturally that it was difficult to pick her out at first! 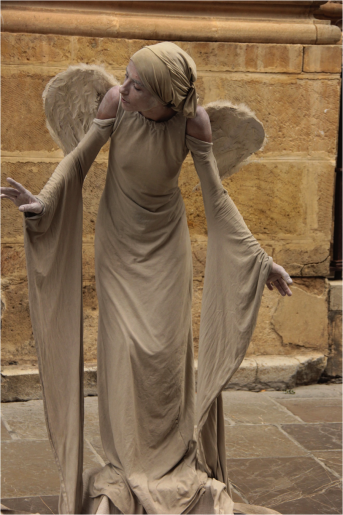 Even during this “short” tour of the city, you could see the obvious connections to Morocco. Although the walls and buildings in the main part of the city were highly ornate buildings with Spanish influence, the small shops squished on either side of the walkways had Morocco spilling out of them. The tea and herb shops, the foreign dialect ringing in my ears, and, above all, HAREM PANTS. Obviously we saw the typical city sites-- Cute puppies and street musicians-- but the city was so different than what I had experienced previously. We could walk down a roadway and see crumbling antiquated buildings and bridges that have probably been there for hundreds of years, turn our heads and see new buildings and geometrically shaped street lights. But grabbing tapas and checking out the stores could not prepare me for the wonder that Granada held for us-- The Alhambra and Generalife 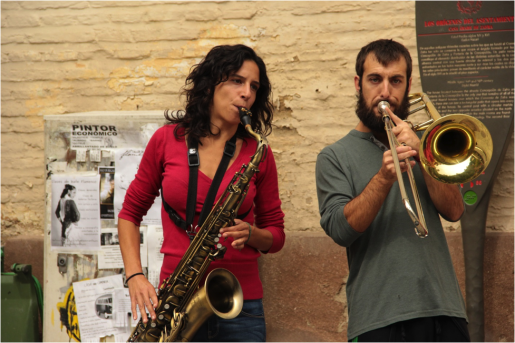 Now, I’ll be real with y’all, I was so extremely exhausted that I wasn’t sure I could survive out at the Alhambra. This feeling didn’t change until we reached the top of the hill and saw cannons and palaces. Looking at the sheer magnitude of these buildings really put my mind in its place. We were standing on these grounds, looking across the empty lands and looking back on a small part of history. Before we entered, our tour guide told us how there had once been several buildings akin to the Alhambra that had been blown up-- these were the only ones that stood today because a one-armed man went around to diffuse the explosives. I got excited. We hadn’t seen the inside of the buildings yet, but if this man was willing to single handedly diffuse explosions and defy the regime, they must have been worth it…. they must be amazing. Words cannot describe the wonder found within the body of the Alhambra. I have visited monuments, I have seen exquisite architecture, and I am close friends with beauty. The transition from the exterior-- a very plain brick structure-- to the interior was astounding. The walls were laden with highly ornate floral designs, all in plaster with extreme attention to detail. The ceiling was crafted with ornate wooden panels, designs and geometric patterns etched, visions of the night sky overhead. With the arabic on the walls and the faded colors, I felt as though I had stepped into another world; the pale white of the plaster became laden with colors of days long since past and revealed its true beauty. Rather than listening to me fumble at an attempt to describe what I feel is one of the true wonders of the world, you should just book your plane ticket now and head out to Granada. 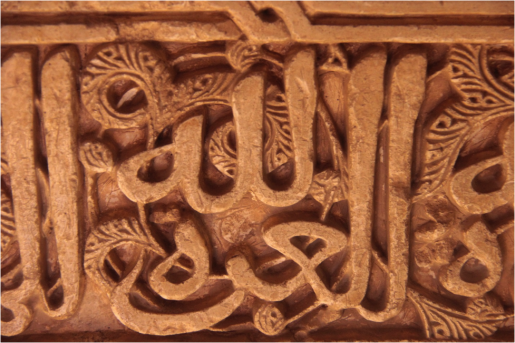 As the sun slowly set on our first day in Granada, we began our hike to the Generalife. Meant to be a summer house for the Nasrid kings in Granada, the Generalife was surrounded by luscious gardens, gigantic hedges, and lengthy pools. Reaching the top of the hill where the actual summer house was located, we were followed by the fragrance of summer roses and honey suckle. Once we entered the building, it seemed as though the sun had stuck around long enough to grace us with the perfect warm array of yellows and oranges. Too comforting, in fact, because at this point our little group was ready to fall asleep on the closest hedge or friendly looking rose bush. And so our little tour ended here and we walked down from the mountain back into town.

Dinner with Ruben is always a spectacle. Returning from the Alhambra, we had a short time to get ready and head out. Leaving the hotel, we heard music and cheering. A festival? Upon further examination, we had walked into a crowd of seniors dancing classically in a square close to our restaurant. It was an omen of a great night for us UNE students. Dinner consisted of 2 fantastic plates and dessert. Dessert obviously caused the largest debate among our group, but we eventually were able to order and complete our meal. Tuckered out from a fabulous day featuring amazing food, sights, and conversation, this girl was ready for bed!

Opening my windows the next morning provided me with a pleasant surprise. Jackie and I had been given a room on the 4th floor with a spectacular view of the city. Not awake long enough to enjoy this sight, we were whisked off on another one of Ruben’s adventures!

Here is a note of warning, if you ever see Ruben with this face, be prepared for a hike. 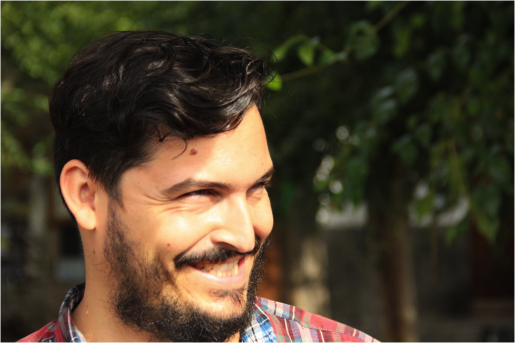 So, we began our uphill adventure. With slopes steeper than your average mountain (or so it seemed) we traversed the streets of Granada to get the perfect view of the city. On our way, we spotted unique graffiti and people who were not dying from the incline.

However, once we reached the top, we understood why Ruben had brought us here. Guitar players surrounded the plaza that had a perfect overlook to the Alhambra. The sun of this early day lit up the hazy sky and left all content to take pictures and pet adorable puppies.

We were released from Ruben’s custody (JK <3) and split up to shop and eat on our own accord. I enjoyed an afternoon of shopping for scarves and pizza with Amelia until heavy rain forced us back to the hotel. Making the best of an unfortunate situation, we settled down at the hotel lobby and watched movies. Soon the rest of our group returned, bustled in by the wind and rain as well. Thus came an end to our Granada experience.

Visiting Granada has been one of my favourite experiences throughout my life, and makes me even more excited to visit Morocco and our fellow UNE students! I really enjoyed spending quality time with these guys, and can’t wait to have more adventures!