Hi guys! I hope you’re all doing great. I decided this time to write about gastronomy, and what better than posting the recipe of the Spanish Tortilla de Patatas? For the ones who don’t know, tortilla in Spain means omelette, so it has nothing to do with the tortilla chips. And now that we are about to start counting the steps of the recipe, it’s time for the Spanish debate: to decide whether we are going to include the onion (cebolla in Spanish) or not. You may think this is unnecessary, but this has actually led to wars and end of friendships (OK, maybe not that much) but it is actually a thing the Spanish people talk about. If you think this is only me who thinks that, please check this post (in Spanish)

In this article, written in Spanish, the most famous Spanish chefs take sides in this battle, and divide themselves between sincebollistas (“if it has onion it’s not a potato tortilla, it’d be a onion tortilla) and concebollistas (“you need to add the onion, otherwise it’s tasteless and I’ll be missing something). ANYWAY, I’m pro-onion so we’ll be using it today.

Regarding ingredients for 4 servings, you’ll be needing:

First, we’re going to peel the potatoes and dice them along with the onions. You can always use more potatoes, but that also means that you’ll need more eggs and onions. Once we’ve diced both, we’re gonna put olive oil in a pan and when it gets hot, we’ll add the onion first and when it turns golden, we’ll add the potatoes. You can cover it so it fries faster (using the steam) and cook them until they get a little darker. Once you get golden-ish, take them out leaving the oil in the pan. We are going to save this oil to fry potatoes and onions other times.

In a bowl, we’re going to beat the eggs with some salt and the optional splash of milk, and add the fried onions and potatoes afterwards. We’re gonna use the frying pan again but with very little olive oil this time, and we are going to let it cook for a couple minutes, or two minutes and a half.

NOW THIS IS THE TIME TO GET SCARED

The most difficult step is when you have to flip the tortilla. To perform that, we need a very big plain dish that can cover the pan and cross our fingers so it doesn’t fall. Try flipping it on top of the sink just in case, as it’s easier to clean there. You need to be fast. Here’s a video so you can see how it’s done: https://www.youtube.com/watch?v=0QD5PutV6sw

Once you’ve flipped it, put uncooked part facing down back in the pan and let it cook for a minute and a half more or less! Then serve it in a dish immediately or otherwise it will keep cooking, turning dry afterwards. 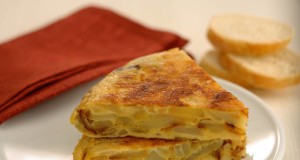 ADVISORY: This is MY recipe. It does not mean that it’s the right way to do it, there’s a thousand different options. I just think it’s easy this way and that’s how I always cook it!