I hope you’re having a fantastic beginning of your spring semester here in Seville. As you might have already noticed, in Spain −especially in the region of Andalusia− there are still traces of all the civilizations that once lived in the peninsula. One of the cultures that had more impact on the south of Spain was the Islamic one. The Iberian Peninsula was almost completely conquered by Moorish Muslim armies from North Africa in the early 8th century, and they remained here until 1492, when the Reconquista was completed and the Catholic Monarchs −Queen Isabella I of Castille and King Ferdinand II of Aragon− expelled the last Muslims living in the sultanate of Granada. All that happened a long time ago but we can still physically see this part of the Spanish history and you, as students of our Spring Program in Seville, have the chance to visit two of the major monuments of that period: the Alcázar in Seville and the Alhambra in Granada.

Located right next to the Seville Cathedral, the Alcázar is a beautiful royal palace that serves as an example of the mudéjar style. It was originally built for the Moorish Muslim kings and it’s still used by the Spanish Royal Family as its official residence in Seville. What’s more, in 2015 it became the set for some episodes of the well-known TV series ‘Game of Thrones’. How many rooms of the Alcázar can you recognize in the first episodes of season 5? 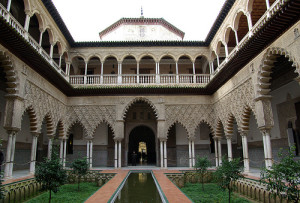 This impressive nazarí palace is located in Granada, the city in which the last Muslims lived before being expelled. Its rooms are richly decorated and its Court of the Lions (in Spanish, patio de los leones) has become one of the landmarks of the city.

Apart from these beautiful palaces, the Islamic period also left an indelible imprint on our language. Some everyday words such as almohada (pillow), aceite (oil), aceituna (olive), café (coffee), or naranja (orange) are derived from Arabic! 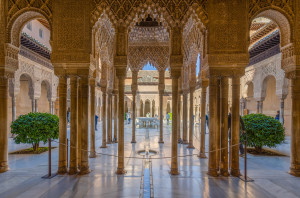