Experiencing Semana Santa with your 5 senses

¡Hola de nuevo! After 3 months in Spain (yes, time does fly) you are more than ready to experience one of our biggest festivities: Semana Santa (Holy Week). As some of you have already realised, Semana Santa can be quite confusing and even daunting. There is a lot going on at the same time, and that is why we want to help you understand it and make the most of it.

Although Semana Santa has a strong religious background (as a commemoration of the Passion of Jesus), it is also a cultural and social event that can be enjoyed by everyone. To understand it better, we recommend you this comprehensive post from a former mentor: https://servicesabroad.com/studentblog/?postId=1260/semana-santa-sevillas-biggest-holidays

If you are in the city center during Semana Santa, you will definitely see at least one of the over 50 processions. They are religious statues representing the Passion of Jesus on enormous pasos (floats) carried around the streets by costaleros (bearers) and accompanied by hundreds (or even thousands) of nazarenos (penitents) who hold candles. The itinerary of these processions (from their home churches to the Cathedral and back) can easily be found on the Internet and the local newspapers. 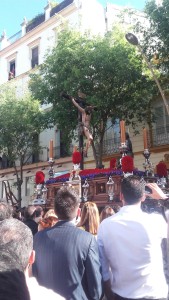 Some processions are silent, while others are accompanied by a choir or chapel music, and a lot of them feature a band (banda) following the float and playing hymns (marchas). Along the itinerary, talented individuals may express their feelings towards the procession by singing a religious, flamenco-style song called saeta, which is often sung from a balcony.

Silence is also a key element at Semana Santa, since it is a way of showing respect and appreciation for the processions. Everyone must remain silent when the float arrives and, in some particularly grave processions, during the whole time. How to identify if that is the case? If the penitents are dressed in black, it can be a sign, but the best idea is looking around and behaving like the Sevillanos. 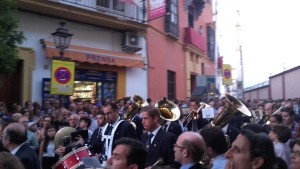 The strong smell of incense, an aromatic essence meant to purify, accompanies every procession. It is carried by young boys (or girls) called monaguillos who spread it in front of the pasos (floats) during the whole itinerary. Floats are also decorated with fresh flowers in gracious bouquets.

Touch:  crowds and no touching

The city center can get quite crowded during Semana Santa, since everyone wants to see the pasos on the first row and some areas are of restricted access. Try to avoid big crowds and, if you get trapped in one (bulla), be patient and collaborative.

Another important thing is that you shouldn’t touch the floats. Although some people do it, it can damage the float decoration and thus it is not a good idea.

As you know from previous posts, in Spain we love eating, and Easter is no exception. Torrijas and pestiños are always present at our homes during these days. Torrijas, like French toasts, are prepared with honey, eggs and wine. Each family has its own recipe (claimed of course to be the best). On the contrary, pestiños are made of flour, but are also covered in honey. 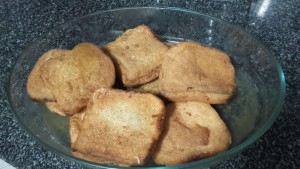 These torrijas were made by my grandma (and, of course, they are the best) 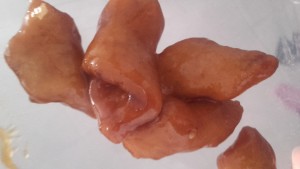 Pestiños made by cloistered nuns

Now you know a little bit more about Semana Santa, but we encourage you to go a see pasos and, whether you are a religious person or not, to embrace this very different experience.