Welcome to one of the most important weeks in Seville. If you are not studying here, don’t worry, you have a whole week for coming and enjoying it!

This year La Feria begins on Tuesday 12th April (00:00) with “el alumbrao”, which means that all the bulbs decorating “la portada” (the main entrance, easy to see from Calle Asunción) are  turned on. This night is known by all Sevillanos as “el pescaito” (the little fish) because they eat fried fish inside the “casetas” (the green and red striped tents) and then, at midnight they enjoy “el alumbrao”. Despite being at the Feria from Monday night, remember that La Feria officially starts on Tuesday. You won’t see any lady wearing a flamenco dress until Tuesday at the Spanish lunch time. 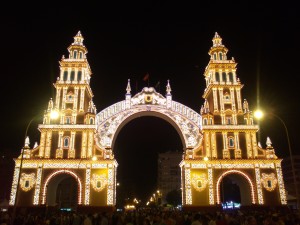 But, how did this tradition begin? The fun fact is that the first organizers were a Basque guy called Ybarra and a Catalan guy named Bonaplata in 1846. Originally, it was a three-day cattle`s market, but after lots of years, Feria has become a seven-day event taking place in El Real de la Feria (next to los Remedios neighborhood) where flamenco, fun, and culture are mixed all in one.

Don’t panic! If you are not into dancing, you can also go to “calle del infierno” (Hell street), which is a kind of carnival with rides and games. The name of the street is due to the mixture of loud noises coming from each ride! But be careful! It’s too easy to get lost.

Close to the portada you will find an information desk where you can get a map. La Feria during the day is more familiar: you can gather with family and friends inside the casetas for dancing, eating, singing and drinking. The typical food is based on tapas (Spanish potato omelette, serrano ham, cheese, fried fish, shrimps, montaditos…) and the popular drink is called “rebujito” (litttle mixtures), which consists of a mixture of Manzanilla (fino sherry) and Sprite or 7Up. La Feria stays faithful to its origins, that’s why you will see fitted out horses and majestics chariots, which are allowed to be in La Feria  from midday to 8:30pm. 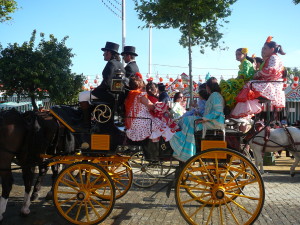 You may have heard that almost all the casetas are private; this means that you need to be a member or have a membership to get in. You can also get inside if you are accompanied by a member. It is very typical to go to the caseta of the cousin of the friend of the friend of your friend or just sneak-in some caseta saying your friend is inside. However you can find some public casetas where everyone is welcomed! Here you have the list of public casetas:

La Feria during the night is completely different, you have to be careful because at this moment of the day you may have lost the notion of time and you can find situations that are too much animated. Try not to be alone! Some casetas will be closed, but other would be opened for everyone and they even would have changed the music style into popular music for youngsters. Don’t worry if you stay until too late (or early in the morning) you can have churros con chocolate outside or try the churros at “las buñueleras” (gypsy women), you can find them at Manolo Vázquez 17-21, don’t miss it!