I hope you’re doing great and making the most of this experience on this side of the Atlantic. The topic I have chosen to write about this time is HALLOWEEN. 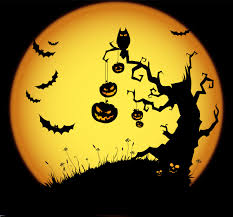 As you may expect, in Spain we don’t take the Halloween tradition that serious. I mean, some children do go out and ask for candies but that is not part of our culture and were are not that used to the scary night. This tradition has pagan origins, and the Spanish culture has mainly followed the Catholic events. Halloween has trended here few years ago, and you will notice that it lasts only one night, no events before. Many people watch horror movies that night to feel somehow the Anglo-Saxon spirit, but actually we don’t practice this tradition.

So, you won't be seeing carved pumpkins in the streets, but probably you’ll find young children dressed like Dracula or any monster. Some regions in Spain like Cataluña, Asturias and Castilla y Leon, instead, celebrate the Magosto or Castanyada (mostly in the northern part), that consists in cooking chestnuts in a bonfire on the 31st night.

I would also like to add that our tradition in these days is the celebration of the Dia de Todos Los Santos, which is on the following day, November 1st. It’s a national holiday (so most business will be closed) and people traditionally go to the graves of their families and dedicate the day to clean everything there.

But don’t panic! Many discos are planning to do some Halloween themed parties with customs and decoration on the night of October 31st. You may want to go clubs, as some of them will be decorated for the occasion. Besides, many people are already thinking about what costume they’re going to wear and you will see very cool ones.

Apart from the discos, there are also other activities planned for these days like an art exposition about monsters at the Delimbo Art Gallery (in the Alfalfa district) and a tour around the Judería (Jewish quarter) telling ghost tales on the 31st evening.

You may also want to go to the Halloween Party at Isla Mágica (the Amusement Park at the Isla de la Cartuja) with further information available in its website: https://www.islamagica.es/fiestastematicas/halloween.php

I hope you guys have fun that evening, even if you choose to celebrate it in the American, European or even African way!