Belts fastened? It’s time to learn something from one of the biggest traditions in Seville, la Feria de Abril! Most people have been expecting these dates for months, preparing physically to both fit in their outfits and to be able to stand a whole week of dancing sevillanas. There’s a lot to talk about, so I’ll give a brief lesson of history and then I will give you some vocabulary and tips to follow during this coming week.

La Feria de Abril de Sevilla (April’s Fair) started in the 1840’s as a cattle and agricultural fair, and it used to take place at Prado de San Sebastian. It didn’t use to take that long, only about three days, but due to its success, the city hall established during the years that it would take 6 days instead (even though there’s always some organized pre-feria celebration). As it grew bigger with the time, they moved the Feria to Tablada (right attached to Los Remedios neighborhood) in 1973, and has taken place yearly in that location. 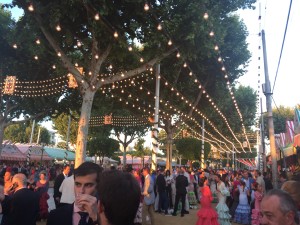 With that being said, you need to know where to go and what to find in la Feria. If you like going to the rides, there’s a carnival area close to the metro station of Blas Infante called Calle del Infierno (Hell Street). There’s also lots of stands to win stuffed animals and buy churros. Apart from that, you can also find the Portada, the main gate to La Feria, which is located right at the end of Calle Asunción. This is only the beginning of the Feria, though, as it continues throughout the Blas Infante metro station. On saturday April the 14th 2017 before midnight everyone will gather there for the countdown of the alumbrao at midnight, that is the lightning opening of the fair. For the record, that night nobody will be wearing their flamenco dress– it’s the eating-fried-fish night and the people try to wear good looking outfits. From the following day on, you can start wearing all those beautiful flamenco dresses that most of you got already (for boys though, chinos and blazers will do, as I’m afraid there’s no flamenco dresses for us) and start dancing sevillanas! (NOTE: I’m looking forward to have the flamenco class with all the guys studying in sevilla this semester) 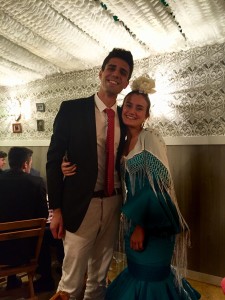 My friend (in her flamenco dress) and I at the feria.

At the Feria there’s hundreds of casetas, that is, little tents some associations or groups of friends share and in order to enter to most of them you need to be a member or have an invitation from one. Try getting an intercambio who has a caseta, but otherwise there’s nothing to worry about! There’re plenty of free-access casetas throughout the feria. Some of them are owned by Spanish political parties, but there’s also the ones dedicated to the different districts of Sevilla and more recently they opened a big caseta for international visitors located in Calle Pascual Marquez, 225-229. This reminds me that last, but NOT LESS IMPORTANT, is to get a map of the feria. Most locals get one on their phones, as we keep forgetting the names of the streets and it is difficult to move around. This way, you won’t get lost that much and will be able to enjoy the feria the best.