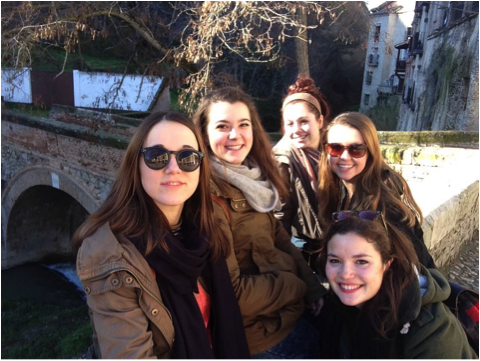 Defying the rain and the cold, we set off to Granada early on a grey Saturday morning. The sleepy faces son gave way to exclamations of amazement as we approached Granada and the sight of the snowy Sierra Nevada greeted us.

Thanks to the great location of our hotel, we were able to check in and leave for a short stroll and lunch before leaving for the Alhambra. Granada is a splendid city, with its Moorish stlye and the inviting smell coming from the tea bars. After this short break we hurried to catch the bus that took us to the Alhambra. 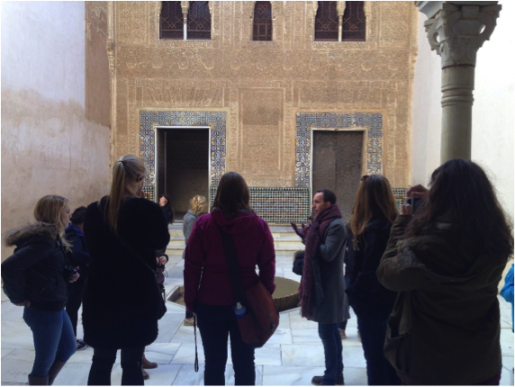 Neither the chilly wind nor the rain could defeat us on our way through this haunting palace. Fortunately, we had a really great guide who made sure we didn’t miss a bit of the monument’s bountiful history. No wonder it’s a World Heritage Site! We were taken through a maze of sumptuous chambers and charming fountains, where we learned about its history and took plenty of pictures –big shout out here to our guide and photographer, Robert. However, all good things must come to an end, and so did our visit to the Alhambra. A short walk downhill, trying not to fall, as it really was a steep slope, and we were back in the city.

We had some free time until dinner, so we took the chance to do some shopping –which included bargaining for scarves, purses, or Arabic handwritings. Some of us even got to experience holding a huge parrot on our shoulder! There was this Street packed with tea bars, and some of us chose to give them a go and treated ourselves with delicious Moorish-style teas at a cosy Alhambra-like bar. Granada is a city with a captivating atmosphere that leaves no one indifferent. Just like Sevilla, it’s filled with history, but it still keeps that romantic air that makes it different. Granada is full of life, specially of students, and, as I was telling some of the girls, it is the birthplace of many of Spain’s most famous music bands.

It is also worth mentioning the succulent dinner we got to try. Pasta, seafood, all kinds of meat, special meals for our veggies… We could choose among plenty of mouth-watering dishes, thanks for choosing that restaurant, Rubén!

On Sunday we enjoyed what was, in my opinion, the most beautiful part of the trip, and of Granada, actually. The final day began with a walk from the cathedral, passing by Paseo de los tristes on our way to the viewpoint, where we were delighted by a marvelous sight of the city spreading below. Oh, and also by a skinny dog wandering about.

After some more shopping and another tasty lunch, we got ready for the journey back. It had been an intense stay in Granada, short but rather fruitful. Before coming back, some even had the strength to go hiking around the city! Some were asleep a minute after hopping on the bus, but their sleep was son interrupted by the wows as we got a final glimpse of Granada, with the white peaks of Sierra Nevada on the background. 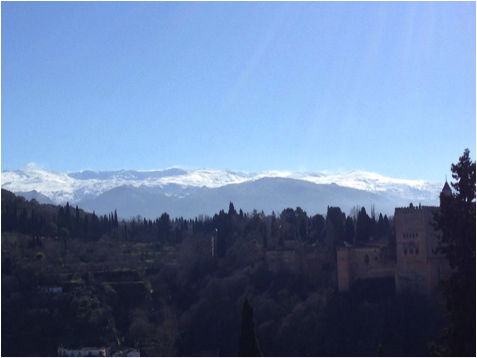 All in all, I think Granada is a must see for anyone visiting or, actually, living in Spain. Sadly, the trip was for a weekend only, though I really hope the UNE students enjoyed it as much as I did!