Hello everyone! We are already in the middle of your semester in Sevilla (You made it!). Now, are you ready to go in depth into one of Sevilla’s biggest holidays?

Semana Santa (Holy Week) commemorates the death of Jesus Christ, and it last a whole week, from Domingo de Ramos till Domingo de Resurreción.  Even if Semana Santa has a really strong religious background, everyone can enjoy it despite their religious beliefs as it is a type of art that makes Sevilla look like an outdoor museum during this week.

As you all should know by now, Sevillanos dress up in Domingo de Ramos and more importantly, we wear brand new clothes! We do that to greet  the beginning of an important week in Sevilla and the change of season (Spring is coming!). Although Domingo de Ramos means Palm Sunday, in Sevilla we carry olive branches instead of palm tree ones.

Incense is also key element for Semana Santa. El monaguillo (a young boy that helps in the church) carries the incense and walks in front of the pasos (floats) to purify the way that the procession is going through. Semana Santa in Sevilla is nothing without the strong smell of this aromatic essence.

In Sevilla we have a popular name for those who really love Semana Santa, we call them capillitas, but they prefer to call themselves cofrades. If you want to see Semana Santa with a capillita you better be prepared to walk through shortcuts in order to see every single one procession. They know which marcha (special music played by the bands - although not all the floats have music) belongs to which hermandad (brotherhood or churches), the colors of the nazarenos’ costumes (nazarenos are members of the hermandad), and they are more than able to distinguish each talla (carving).

Even though Semana Santa is a Christian tradition, nowadays it has became a cultural event where people enjoy listening to the marchas and seeing the different carved figures.

But children can also enjoy this holiday! If you hear ¡nazareno, dame un caramelo! it means that children are trying to get sweets from the nazarenos. You may even hear them threatening the nazarenos by singing "nazareno, dame un caramelo y si no me lo das, te pego una patá". It is not that they are actually going to kick the nazareno but it is a rhyme a 5 year old kid can make. Making wax balls is funny too, each Semana Santa children make a ball out of aluminium foil that they can get from wrapping their merienda or bocadillo and ask nazarenos, who are holding a lightened large candle, to pour over the aluminium ball some melting wax. By the end of the week children want to have the biggest and more colorful wax ball. They also keep it for next Semana Santa in order to make it even bigger. 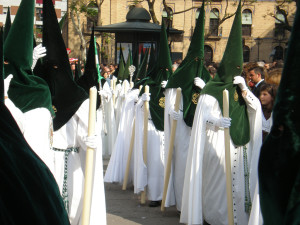 An iconic moment is Thursday night (from Thursday to Friday morning), the so called La Madrugá. Everyone who likes Semana Santa is ready to spend all night long awake to see pasos. On Thursdays is the only time in the week that the floats go out after midnight, because Jesus Christ was crucified on a Thursday night. The most important hermandades that take out their floats this night are La Macarena, La Esperanza de Triana, El Gran Poder, El Silencio, Los Gitanos and El Calvario. As in every aspect of Sevillanos lives (like Sevilla and Betis in football), there has to be a rivalry between two neighborhoods, in this case, resulting in a competition between which Virgin is more guapa (beautiful): La Macarena or La Esperanza de Triana. Judge yourself and make your own choice! 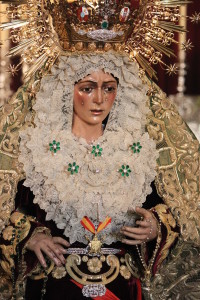 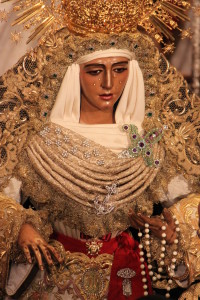 Three days after being crucified, Jesus Christ resurrected. This day is Domingo de Resurección. Maybe you are wondering what is the difference between this day and the rest of the week. La Virgen de la Resurreción (The Virgin of the Resurrection) is the only one that you will see that is not crying or looks very sad! Because finally her son is alive.

In Spain every holiday comes with a special food. In case of Semana Santa there are two desserts: torrijas and pestiños. Both of them are covered in honey, but torrijas are made of bread and pestiños out of flour. 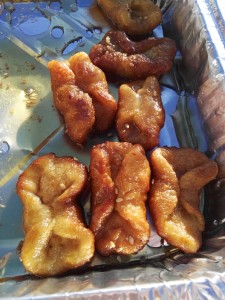 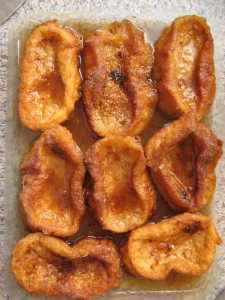 For now everything seems amazing, but the worst it can happen in Semana Santa for a Sevillano (specially if you are a capillita) it’s the rain. As we get closer to Spring, it’s common to have some rain in Sevilla, and Semana Santa is a talisman that attracts it. As the floats are covered in really expensive clothing and the carvings are very old and valuable, brotherhoods don’t take them out if it’s raining. We have to keep in mind that all the nazarenos, costaleros (who carry the floats on their necks) and devotees have been waiting for a whole year to make their procession, so if it rains everybody feels devastated. It’s not uncommon to see all of them crying on TVbecause it may have rained in the previous years and they can’t take out the procession either this year.

Now you know a bit more about one of our biggest traditions and whether you are religious or not, whether you like art or not, it is worth to see at least one paso! I encourage you to find your own capillita friend and explore the city in the chase of some processions.

We use cookies to ensure that we give you the best experience on our website. If you continue to use this site we will assume that you are happy with it.OkUse of cookies