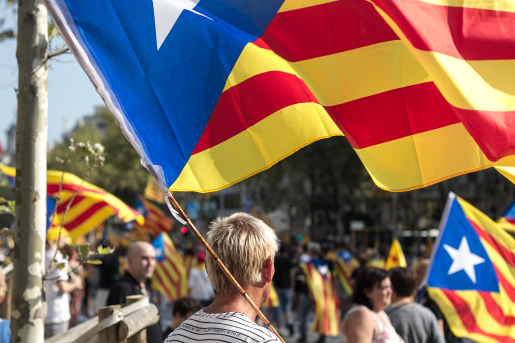 Alicia and Rubén are the ESA Barcelona and Sevilla coordinators, respectively. They had a conversation about recently about the Catalan Consultation via email that we decided to turn into a blog post to share with you and give you local perspectives on the topic.

They both agree on the right of the Catalan people to vote and decide but the information in the mainstream media in Barcelona and Sevilla present different scenarios and they wanted to discuss how this consultation was seen in their respective cities.

Dear Alicia, I went to the European Film Festival in Sevilla yesterday night. I saw "The long way home" (originally in Catalan "El camí més llarg per tornar a casa") by Barcelona-based promising young filmmaker Sergi Pérez. "The long way home" depicts Joel's sorrow caused by the recent loss of his wife. Something forces him to leave home and he meets different people along a 24 hours odyssey. It's a quite good movie. After the screening there was a Q&A session with the director. The first question from the audience was something like what follows: «I have never been in Barcelona, but I was surprised that the characters speak in Spanish and Catalan equally. Why didn't you just film everything in Spanish so that we all understand?». I think this question pictures the public debate around Catalonia in Sevilla very well: many of the people here do not even know the reality of the Spanish-Catalan bilingualism there. They still think that just speaking in Catalan is a sort of an affront to Spanish speakers (so imagine what they think about the right to vote for self determination of Catalonia). In honor of the truth, many people in the room thought this person was just an ignorant. Could you imagine what he thinks about the recent consultation for the independency of Catalonia?

Bon dia Rubén, Well, the case you describe reminds me of the debate held in Catalunya about what language should be the vehicular one at schools. I grew up in a small village where barely anyone spoke Spanish on a daily basis. My father is from Andalucía so, at home we always talked in Spanish but once I left the home, everything was in Catalan. At school all the courses were taught in Catalan and it was never seen as a problem for anyone. It was perceived as the right method to integrate Spanish and international students. In fact, we can switch from Spanish to Catalan without even realizing. That’s probably why teaching one language rather than another was not an issue. Now, some schools are obliged to teach certain subjects in Spanish. I think this makes a division and it can complicate the integration of kids.

You are asking me about the Consultation we had on Nov. 9th. Even if it was considered as illegal, more than two million voters were exited to deposit their opinion in a ballot box that day. The morning after, we had the results but what shocked me the most that day was not that a great majority voted in favor of having a independent State, but the ballot I found in which someone left a hand written message in Catalan: “I want equal respect to one another”. This is what is the most important for me: respect and understanding. How was the consultation was seen in Andalucía, by the way? Was it an important event or you were more worried about corruption and unemployment?

Hola Alicia, I agree: respect and understanding must be the most important elements in the public debate regarding both the Catalan consultation and any other political debate. I think the consultation in Andalucía is seeing as an affront because the filter is the Spanish nationalist press located in Madrid. This very centralized conservative press supports a hate speech against everything different from what they consider Spain. This economic crisis, which is also a crisis of political representation, is triggering debates about what a worthy life is, something that was definitely hidden behind values such as benefit or profit. A worthy life is, among other things, the right to decide. I hope this consultation becomes legal in a near future and Catalans can decide what kind of society they (and why not, we) want to build together.