On July 23rd, I (Gladys) embarked on my Study Abroad Program in Barcelona. I was determined to know the city as good as any local, so my first task was to learn all the touristy attractions first. Below are my top 7 picks for things you need to see before you leave Barcelona. Every afternoon, after the heat of the day dwindled down, I slipped on my sneakers and went for a jog around the city. Once riding the underground metro became second nature, I knew I had to see the ground level of barcelona and with a bit of fitness motivation, I was able to run the entire city within the course of 1 month. I found things that truly sparked my interest and even those of my belly.

Here are my Top 7 MUST SEE places to visit before you leave Spain!

-- Plaça de Catalunya–  large square in the city center. Lots of activity all day. Shopping on Passeig de Gracia, entrance into Las Ramblas, Gótico, and lots of food! My favorite gelato place? Hands Down Dinos! I walked three hours EVERY night to enjoy a cone of Frambuesa and Dulce de Leche.

--Casa Batlló– One of Gaudí’s masterpieces along Passeig de Gracia- fashion center nearby.

--Gothic Quarter- Old City of Barcelona. Really cool alley like streets and timeless architecture. You really feel like its a whole new world. 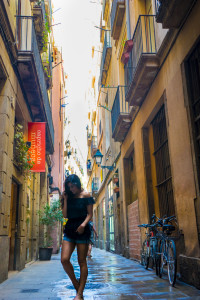 --Magic Fountain of Montjuïc– most likely the first synchronized water, light, and music show ever presented in the world. Shows in the summer from Thursday to Sunday. I danced like a true princess while the show ran behind me. It was magical. 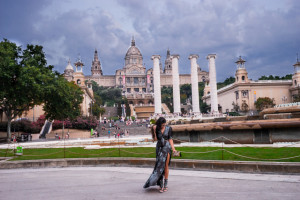