New Year’s Eve is a big event in every part of the world and each region has its own traditions that make it unique and special. Of course, in Spain we have our own too.

Being with your loved ones

The best-known tradition is eating 12 grapes. The last 12 seconds before the beginning of a new year, we eat 12 grapes following the sound of the bell of the Plaza del Sol (The Sun’s Square), in Madrid. This is the most famous bell in Spain. That’s why lots of people welcome the New Year at the square although most people normally follow the chimes on the TV. 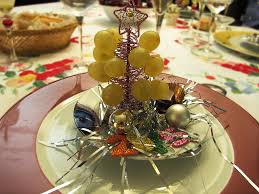 Starting the New Year with the right foot

While eating the 12 grapes some superstitious people keep only their right foot on the floor. That way they will start the first day of the year with good luck.

In some big cities like Salamanca and, definitely, in Madrid, they verify that their bell works well before New Year’s Eve. Many people gather together to practice eating the 12 grapes in 12 seconds. However it is said that if you eat the 12 grapes before December 31 at midnight it gives you bad luck, so people practice with olives, jelly beans or chocolates. 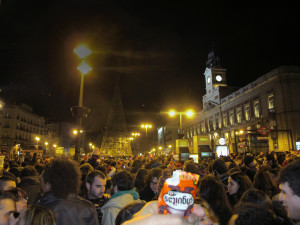 Some people eat a teaspoon or a plate of lentils at midnight or on December 31st or January 1st for lunch. This is a symbol of the abundance, prosperity and economy throughout the year.

Another tradition is to wear red underwear because it will bring you a great year of love. Besides, it’s a day for dressing up because many people go to a cotillón after or before midnight. A cotillón is a party where people dance, eat and have fun all night long. Some people wear masquerades and other special costumes. In fact in many small towns people like to dress up.

We don’t have a firework show as big as people have in the States or in other places of the world. But we like fireworks too so some people buy them and shoot them off.

January 1st after partying all night long, we eat some churros as breakfast before going to bed. But don’t be too excited, only some breakfast bars and churros kiosks are open because the January 1st is a state holiday and stores are closed. 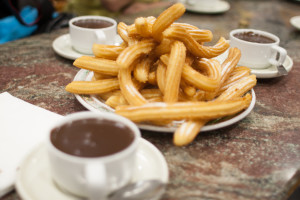 We don’t have the typical American kiss welcoming the New Year but we kiss all our beloved in the cheek to wish them good luck for the coming year.