While Barcelona is one of the best cities in the world –I would say it is the absolute best, but I might be a bit biased– there are a lot of other wonderful places to visit in Catalonia. Girona, halfway between Barcelona and the French border, is a lovely city that tends to be overlooked when tourists visit Catalonia. Yes, it might be a bit small, but its history and overall medieval charm definitely make up for it. The citadel of Girona was built by the Romans because of its strategic location on the Via Augusta. After the fall of the Roman Empire, Girona was ruled by the Visigoths and was later conquered by the Moors. Charlemagne took back the city and turned it into one of the countships of Catalonia, which was later turned into a duchy. In addition to the Moors, the Jewish community in Girona was expelled from Catalonia by the Catholic Monarchs centuries later. In total, Girona has undergone twenty-five sieges and been captured seven times, mainly by French forces. This is a lot for a city that barely has 100.000 inhabitants! We were able to appreciate Girona’s history by visiting the old fortifications and the Cathedral. We walked on the old city walls and climbed the lookout towers, where we enjoyed an amazing view of the city and the surrounding countryside. Then, we visited the Cathedral and its museum. We were very impressed by its nave; it is the second widest in the world, only after St. Peter’s Basilica in Vatican City. 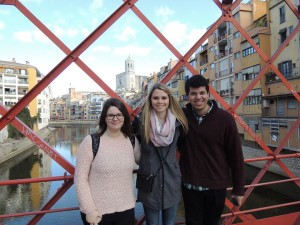 After that, we headed down the stairs (all 90 of them!) and went to have lunch at a typical Catalan restaurant. The UR students had the opportunity to try canelones for the first time, and they now understand why we Catalan people love them so much! We had free time for the rest of the day so we used it to walk around the streets of Girona and do some shopping. On the next day, we headed to Figueres to visit the Dalí Museum. Salvador Dalí was a surrealist painter, and one of the most famous Spanish artists in the world. His museum is a reflection of his personality: bizarre, unexpected and extravagant. It is a new concept of museum that is definitely worth experiencing. After the visit, we took the train back to Barcelona. We were glad to go home because we were all extremely exhausted, but we definitely had a great weekend!