What about Christmas in Spain?

Christmas is a special moment for all of us: a time to be with the family, to meet friends that we haven’t seen for months, and to be thankful for all we’ve lived during the year. In fact, most of you’ll leave to spend this time back home. However, I recommend you to come back to Spain sometime and live a different Christmas experience here.

These are some of the special characteristics of a typical Spanish Christmas time: 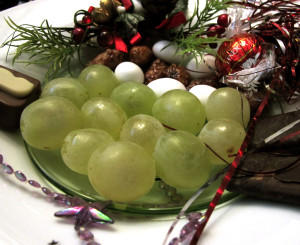 New Year’s Eve or Fin de Año: some of you already experienced what it is like eating twelve grapes or las doce uvas to celebrate the beginning of the New Year. But for those who didn’t take part in the scavenger hunt around Seville, I’ll tell you more about it. New Year’s Eve in Spain, unlike other countries in the world, is mostly celebrated with the family. Before it’s twelve o’clock, we eat twelve grapes while watching the campanadas at Puerta del Sol in Madrid in our TVs (or if you’re lucky enough, live). It’s difficult to explain it to someone that has never experienced it. That’s why, I recommend you to watch this video so that you have a better idea. After the
campanadas and toasting, we meet our friends to celebrate the New Year.

The nativity scene or portal de Belén: you’ll be able to find a portal de Belén in almost every single Spanish home, not to mention the main squares of our villages and cities. But not only that. Especially in small towns, there are belenes vivientes, in which children and also adults represent the characters related to the birth of Jesus Christ. 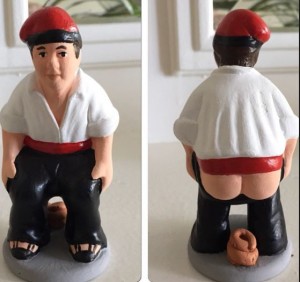 The caganer is a characteristic figure of the Catalonian nativity scene, although now spread all over Spain and even Europe and South America. It’s actually a shepherd or pastor, crouched down, and shorts down, defecating. Nowadays, you can find in stores caganers with all kind of jobs (police office, nurse, teacher) and even representing celebrities and important characters of modern society: from Sponge Bob, to the Queen Elizabeth of England or Barack Obama. 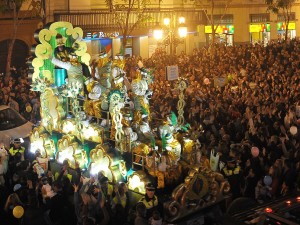 The Three Wise Men or Reyes Magos de Oriente: as you may already know, the Spanish Christmas Holidays last till the 6th of January. Even though more and more homes are visited by Santa Claus or Papá Noel, as we call him in Spanish, during the Christmas night, in the Spanish tradition the Reyes Magos de Oriente are the ones who bring us gifts. In fact, the evening of the 5th of January takes place the Cabalgata de los Reyes Magos, a parade in which the Three Wise Men, all along with their assistants and other characters, throw candies and toys to the children that watch them in the streets of villages or cities. 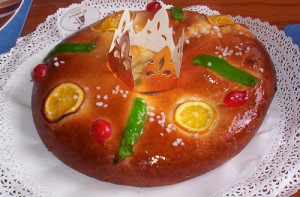 The king cake or Roscón de Reyes, although is a tradition in Spain, its origins can be found in France. The afternoon of the 6th of January, families gather together for merienda and eat, among others, a roscón de Reyes. Inside of it two little things can be found: if you find a crown, a king or something alike (it changes from regions to regions) in your piece of cake, you’ll be a warded with a new year of luckiness. Nonetheless, if you get a broad bean, you’ll have to buy the roscón of the following year. 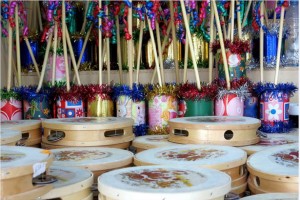 A zambomba, although more from southern Spain, especially from the province of Cádiz, is a meeting where people gather to sing Christmas carols or villancicos at the rhythm of zambombas and tambourines or panderetas. Zambombas usually take place during the first weekends of December, before Christmas Eve. If you want to know more about its origins, click here to watch a video.